Edmondstown is a parkland course. Well maintained. The greens tend to be much slower than we are used to at Delgany and we had to adapt to the conditions. Very nice golf course and well worth a visit. Both clubs were away in the previous round, so Edmondstown had home ad- vantage because they were above Delgany in the draw. Delgany fielded a mix of experienced players combined with some new blood to the Metropolitan competition. The games got off to a prompt start at 16:12. The home team found themselves up against some very good golfers from Edmondstown and competition was intense. The greens at Delgany were considerably slower than they had been over recent weeks. As the evening progressed most games were flu- id with the advantage swinging from one side to another, there was literally nothing in it either way. Playing 14 at Edmondstown we were flat, 4 down, 1 down, flat. Having been up in all of the matches at various stages. The omens were good when first blood went to Delgany. Richie Cogan recorded a superb 7/6 win at home. However, Edmondstown won the next game to level the match at 1:1. The rest of the games were nip & tuck. My fingernails were getting shorter and I don’t have enough hair to lose more……. 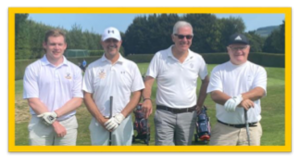 At Edmondstown our next game was going down 18 and we needed a win. The home team were short of the green for two with a tricky chip. Our second shot landed on the green but ran through. 50-50 chance of who would win this one and take the match up 19 – or not!! A superb chip saw the advantage swing to Delgany. The pressure was on the Edmondstown player and his chip ran past the hole by about 6 feet forcing Edmondstown to take the putt first. Unfortunately for us, the Edmondstown player made his putt and Delgany were now 2:1 down. Edmondstown won the next game on 16 to go 3:1 up. The heat was turning up, and I don’t mean the weather…..! 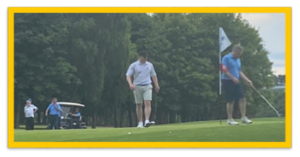 As we stood near the green at the par 4 16th at Edmondstown, waiting for the previous match to finish, there was a call of “FORE!!”, followed by a ball bounding down the fairway that rolled onto the green!! “That must be Dylan” was the comment from the watching crowd as we looked back towards the 16th tee box. Dylan (carrying his bag in the swel- tering heat) was strolling down the fair- way. His opposition was well behind him and struggled to make the green to put the young Delgany man under pressure. Eventually the eagle was conceded to Dylan (in photo) and he was dormie 2 up, winning his game on 17.

Edmondstown 3:2 up and it was still all to play for. The final match at Delgany was tied going up 18 and we were confident that we could take this one. Nonetheless, the opposition made the green in two and won the game with a birdie. Good golf. Not much we could do about that!! Such are the vagaries of golf – & the heartache. Edmondstown 4:2, still the result could have been the other way around – with a little luck. The final game at Edmondstown was called in for a half.

It was a solid performance by the Delgany team. Lady luck was not on our side.

The Metropolitan Trophy was a whole new experience for Liam Bermingham and Luke O’Cathasaigh who joined the panel recently on the back of some outstanding golf in Delgany this year. No doubt they will both go on to feature prominently on Delgany inter club teams in the years to come. Thank you both for your valuable contribution this year. Thanks also to Delgany veterans, Ian Barrett & Colm Whooley who came onboard to bolster our ranks for this match. Simon, Richie & Dylan thank you too for your commitment to the team, the Club and for your performances this year.

Further thanks to Vice Captain Tom Bergin and our away sub John Fitzpatrick & his wife Janet for turning up and supporting the away team. We had a strong Metro Panel for 2022 combined with lofty ambitions that unfortunately did not
come to pass. Thank you all. Edmond