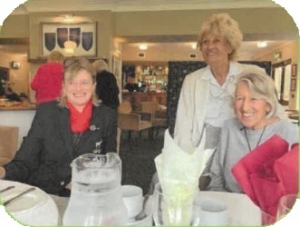 Twenty four past Lady Captains gathered with Captain Ann and Vice Captain Betty for a very convivial lunch in the clubhouse on 17th November. The attendance included captains from as far back as 1971 and it was great to see ladies who for health or other reasons are no longer regularly golfing but are more than happy to have a good old ‘knees up’. The atmosphere was electric. A delicious lunch of baked salmon and seafood salad expertly prepared by Chef Tom was served with their usual good humour and professionalism by Jamie and Kasia.

Everyone had so much fun it was decided to make it an annual event. A big vote of thanks is due to Trish Kenny for coming up with the idea.